Dive into the History of the Eastland

The Eastland Chamber of Commerce, which was chartered with the State of Texas on May 23, 1921, has been a long-standing influence in the community. It was established as a member organization, governed by a board of directors who were elected by a voting membership. The earliest known by-laws on file for the organization are dated October 16, 1919. Subsequent editions of these by-laws also exist in the files at the Chamber office and are an important part of early Eastland history.

Written minutes from as far back as 1926, reveal a unique account of early day business in Eastland and show that development of the business community was the focus from early on in the history of the Chamber of Commerce. Familiar old Eastland names appear time and again in these minutes, re-enforcing the strength and influence our early day businesses and citizens had on our community. 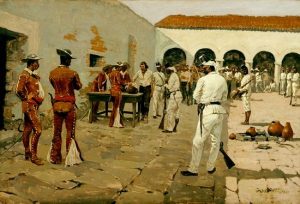 EASTLAND, WILLIAM MOSBY (1806-1843). William Mosby Eastland was born in Woodford County, Kentucky, on March 21, 1806, the son of Thomas B. and Nancy (Mosby) Eastland. He later moved to Texas in 1834 with his wife, children, two brothers, and a cousin. They settled near the site of present La Grange in Fayette County.

From July 25 to September 15, 1835, Eastland served as first lieutenant of a volunteer company under Col. John H. Moore against the Waco and Tawakoni Indians. Eastland went on to fight several major battles that helped in settling the frontier of Texas. 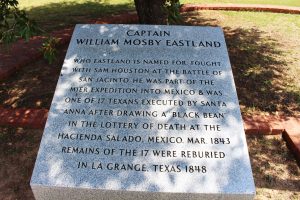 Eastland not only fought in frontier battles but also served in and led companies in the Texas Rangers as they fought for Texas’s independence from Mexico. In response to the raid of Adrián Woll in 1842, Eastland raised a company that he led to San Antonio; but he arrived too late to take part in the battle of Salado Creek. Eastland’s men joined forces with Col. James R. Cook’s First Regiment, Second Brigade, of Gen. Alexander Somervell’s Army of the South West for the subsequent Somervell expedition.

Eager for revenge for the killing of his cousin and nephew by Woll’s men, Eastland chose to remain on the Rio Grande with William S. Fisher’s command when Somervell ordered his expedition to return to San Antonio. Eastland was elected captain of Company B for the Mier expedition. 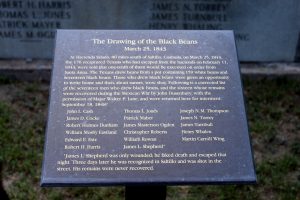 Eastland and his men were taken captive after the battle of Mier on December 26, 1842 and marched to the interior of Mexico. There he participated in the Texans’ abortive escape attempt and was the first of the Texans to draw a fatal black bean, the only officer of the expedition to do so. In a brief private interview with Fenton M. Gibbon Eastland said, “For my country I have offered all my earthly aspiration and for it I now lay down my life. I never have feared death nor do I now. For my unjustifiable execution I wish no revenge but die in full confidence of the Christian faith.” After giving his money to his brother-in-law, Robert Smith and sending word to his wife that “I die in the faith in which I have lived,” Eastland was shot to death, on March 25, 1843.

EASTLAND, TEXAS. Eastland, the county seat of Eastland County, is at the intersection of State highways 6 and 112, northwest of Interstate Highway 20 on the Missouri Pacific Railroad in the central part of the county.

In 1875 Jacamiah S. Daugherty and Charles U. Connellee purchased land on the C. S. Betts survey and platted a townsite. County voters opted to move the county seat from Merriman to the newly planted site, as it was closer to the center of the county, and the new community was named Eastland.

Connellee, Daugherty, J. B. Ammerman, and others built a stone courthouse, and the county commissioners court held its first session in the town in September of 1875. By January of 1876 the population was estimated at 250. The first public school was taught in the community in 1877, and Methodist, Baptist, and Christian churches were soon organized.

The city's growth was assured when, in 1880, the Texas and Pacific Railway was given a number of town lots to build through the community. Eastland Independent School District was established in 1882, and a second courthouse of red stone was constructed in 1883. By 1884 Eastland had three churches, a school, a flouring mill, two cotton gins, and an estimated 500 inhabitants. Among the early newspapers in the town were the Anchor and the Chronicle. Eastland was incorporated for the first time on June 6, 1891, with W Q. Connellee as the first mayor and for the second time on April 6, 1897, with June Kimble as mayor. The second courthouse was destroyed by fire in 1896, and a third courthouse was built the following year.

A horned lizard, later to become famous as "Old Rip," was supposedly placed in the cornerstone. When the third and final courthouse was erected in 1928, the cornerstone was opened, and the toad was found to have miraculously survived. Though many doubted the toad's authenticity, he (and eventually his remains) got quite a bit of state and even national publicity and became an important part of town and county lore.

Eastland grew slowly in the first decades of the twentieth century, reaching 596 inhabitants in 1900 and 855 in 1910. By 1914 the community had two banks, telephone service, and a public Library. The local economy was heavily dependent on cotton. Eastland County experienced a dramatic oil boom from 1917 to 1922, and the city of Eastland grew rapidly, though not as rapidly as other communities in the county, notably Ranger and Desdemona. Eastland population increased fourfold between 1910 and 1920, reaching 3,368 in 1920, though some estimates claim that there were as many as 10,000 people in the town during the height of the boom in 1919.

Charles Ulrich Connellee, surveyor and state legislator, son of Sadosa T. and Lucy A. (Woods) Connellee, was born on August 21, 1851, in Scott County, Kentucky. After studying in the agricultural and mechanical department of the University of Lexington, he taught school in Scott County. In 1874 he was elected county surveyor, but in October of the same year he moved to Texas, where he established a real estate business in Dallas.

In January 1875 he bought and staked out a public square on 320 acres centrally located in Eastland County. The tract had originally been surveyed by C. S. Betts. In May, Connellee, Jack S. Daugherty, and J. B. Ammerman, surveyed the town of Eastland and were influential in getting the new community made county seat.

During the early 1880s Connellee was a leader in efforts to eradicate Texas fever and improve cattle breeds for the area ranches. In 1887 he was elected as representative from the Forty-second District in the Twenty-first and Twenty-second legislatures. In 1911 he was a member of the board that located and established the state tuberculosis colony. He served as a regent of the College of Industrial Arts (now Texas Woman’s University) from 1925 until his death. 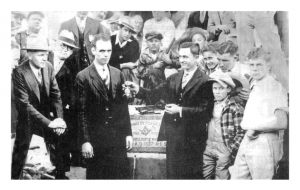 In 1897, a horned toad was placed in the cornerstone of the courthouse in Eastland, Texas, as it was being sealed. People remember the event, but no one thought much of it until 1928, when the courthouse was demolished to make way for a new, Jazz Art model. Three thousand people were on hand to watch the opening of the old cornerstone. The horned toad was found inside, flat and covered with dust, ALIVE, thirty-one years later.

The toad was christened “Old Rip” and soon became a national sensation. He toured the U.S. and even met President Calvin Coolidge. He was so popular that local gas stations gave away complimentary Old Rip replicas to customers. 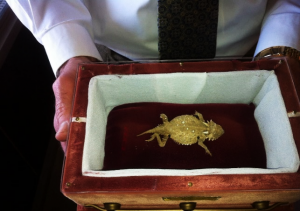 Eleven months after his resurrection, Old Rip died of pneumonia. His body was embalmed and placed in a tiny, open, velvet lined casket in the lobby of the new courthouse. Today, the casket can be viewed from the outside by climbing the steps on the Main Street side and looking through the window at the top. Since that time, Old Rip’s life and demise has been commemorated on the last Monday in February at the Eastland County Courthouse.

During the years, Old Rip has been featured in several television productions and documentaries including Ripley’s “Believe It or Not”. Recently, the Eastland Chamber of Commerce was contacted by an Austrian film maker who was making a nature documentary for the European version of Discovery Channel about animals in the Old West. Old Rip was included in the documentary for which the film maker won a European award equivalent to an Oscar.

Horned lizards (or toads) are in danger of becoming extinct, and collecting Old Rip memorabilia is a popular pastime. For those who collect, our Old Rip merchandise is available at the Chamber of Commerce and in several shops around town.

Architecture and Landmarks by